Troup County, GA (August 27, 2020) -- The broad swaths of wildflowers that adorn the medians and right-of-way of Georgia's interstates are a point of pride for the state's residents, providing vibrant splashes of color every spring and fall. On Interstate 85's southbound off-ramp to KIA Boulevard at exit six, a particular plot might go unnoticed if one speeds by too quickly. It's divided into two distinct sections, and today a man in a yellow caution vest and hat is kneeling among the blooms.

"This particular wildflower mix contains blanket flower and coneflower, which are native perennials," explains Matthew Quirey, who recently earned his Master of Landscape Architecture degree from the University of Georgia. He completed the program with a thesis examining the various ways that The Ray's Landscape Lab on Interstate 85 is utilizing experimental planting designs in the right-of-way, producing not only environmental benefits, but also potential financial outcomes.

The Ray is an 18-mile stretch of Interstate 85 starting at the Georgia and Alabama state line that hosts a series of innovative projects demonstrating how transportation infrastructure can be transformed using environmentally-sustainable technologies to improve the quality of life for future generations. The Landscape Lab at exit six was developed and cultivated by The Ray and the Georgia Department of Transportation (Georgia DOT) in partnership with the University of Georgia College of Environment + Design, the Land Institute, the Chattahoochee Nature Center, Troup County High School and KIA Motors Manufacturing Georgia.

Quirey became involved in the project as a graduate assistant to Brad Davis, associate professor at UGA and the coordinator of the landscape architecture graduate program. For three years, the two have tested establishment techniques with perennial wildflower meadows. On one side of the plot, seeds were planted in the Georgia clay. On the other side, the researchers used granite fines as a sand blanket for the seeds. One doesn't need to be a scientist to see that the flowers flourished with the sand blanket but struggled in the tough clay. The sand blanket provides a barrier for unwanted grasses and weeds commonly found in right-of-way and gives the perennial wildflower seeds a two- to three-year head start in getting established and out-competing the undesirable plants."

Most people think that the purpose of these wildflowers is just for beauty," says Quirey, "but we're seeing that they create some real roadside management benefits, if we can help them establish good root systems and strength. Erosion can be a big problem along Georgia's interstates and highways, and wildflower meadows could help stabilize the soils in the right-of- way."

And Quirey thinks that's just the beginning. The wildflowers also benefit pollinators, like bees and other insects, that serve an important role with regard to our nation's food supply. The researchers are also considering that miles of right-of-way wildflower meadows could also contribute to carbon offsets, which could in turn lessen some of the effects of global warming. They are also cost-effective because these flowers are perennials and wouldn't need to be planted each year. 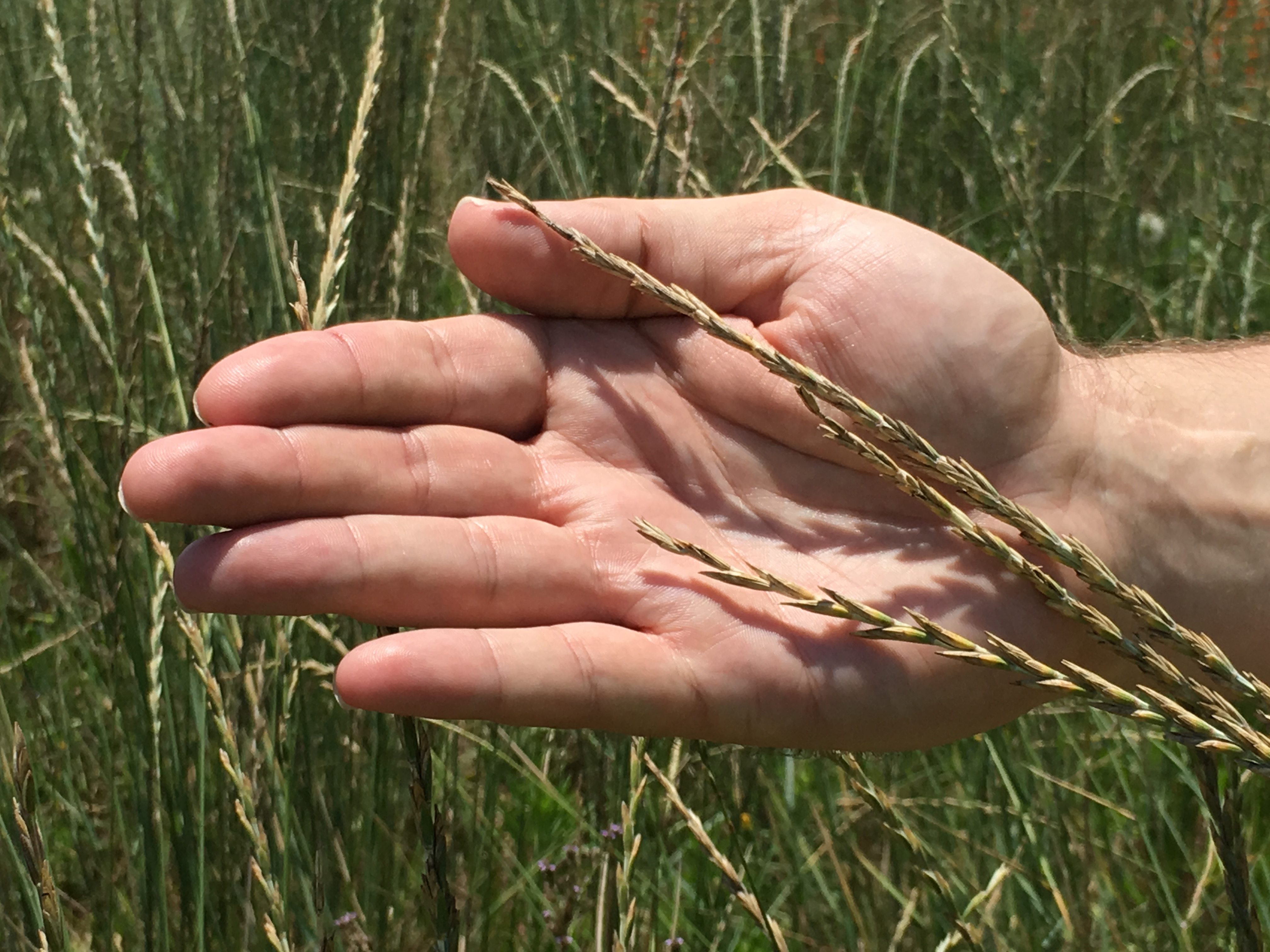 Across the interstate, alongside the KIA Boulevard on-ramp to Interstate 85, is another experimental plot. It might seem strange to see a thirty-foot square patch of tall wheat growing in the Georgia sun, but Quirey thinks our future roadsides could be full of wheatgrass. This wheatgrass is a special Eurasian forage grass called Kernza®, developed by The Land Institute. Since 2017, the UGA researchers have been studying how well the hardy Kernza grows in Georgia, a state not known for wheat."

Like the wildflowers, the Kernza roots also provide stabilization to the soil, making it useful in roadsides," says Quirey, "and it could also be helpful in carbon sequestration. But there's also a possible financial impact to the state. Someday eventually, roadsides could produce enough wheatgrass fiber to contribute to the sustainable production of single-use goods like napkins and diapers."

“It’s exciting to consider how our future highway infrastructure in Georgia could be utilized in ways that provide multiple levels of benefit for our citizens. In our partnership with The Ray, Georgia DOT is breaking new ground – in more ways than one,” says Russell McMurry, commissioner of the Georgia DOT."

We always envisioned more wildflowers on the roadsides of The Ray," says Harriet Langford, founder and president of The Ray. "What we have actually been able to do with Georgia DOT and UGA is so much more. Higher-growing meadows planted on roadsides can work harder for us. They can provide food and habitat for pollinators and meadows can control storm water that rushes off the highway during heavy rain. Our work will help Georgia DOT and all state DOTs cultivate native wildflower and grass meadows across the state."

Georgia was an early innovator with regard to roadside management techniques, and the Georgia DOT started its current Wildflower Program in 1974 with the Garden Club of Georgia. But with more recent partners like The Ray and the University of Georgia, innovators like Davis and Quirey are experimenting with landscaping methods that one day may transform our state's thousands of miles of right-of-way resources into productive planted plots that improve standards of living for our citizens - and they're pretty, too.

About the Georgia Department of Transportation (Georgia DOT)

The Ray is a proving ground for the evolving ideas and technologies that will transform the transportation infrastructure of the future, beginning with the corridor of road that is named in memory of Ray C. Anderson (1934-2011), a Georgia native who became a captain of industry and was recognized as a leader in green business when he challenged his company, Atlanta- based Interface, Inc., to reimagine the enterprise as a sustainable company—one that would pursue zero environmental footprint. Chaired by Ray’s daughter Harriet Langford, The Ray is an epiphany of the Ray C. Anderson Foundation. Learn more at www.theray.org.