The publications, “Transportation + Energy:  Smart Powered Highways,” and “Next Generation Highways:  Co-Locating the Transport of Vehicles, Energy, and Information,” highlight the critical gap between the future energy demand of electrified transportation at scale, and the capacity of the existing, alternating current (AC) electricity grid to meet the demand. Both publications identify the ROW as a publicly-owned asset laid out in a natural grid system, and outline a strategic framework that connects the energy needs of transportation, as well as the energy needs of the communities that the interstate physically connects.

In the U.S., 18.7 million electric vehicles (EVs) are expected to be on the roads by 2030. The existing electricity grid is underpowered to meet the demand of our future energy needs - fleets of electrified freight and delivery vehicles, in addition to passenger vehicles. For example, a single one-megawatt charger for a semi-truck will draw the same amount of power as 900 American homes.

However, simply expanding the existing electric grid can be challenging due to land-use issues and public opposition. This is especially true when transmission line extensions are needed to supply adequate power, as can be expected when providing charging for trucking fleets and large numbers of passenger vehicles. Using our roadsides resolves these challenges by using the existing blueprint that connects our communities.

The Webber Energy Group at UT Austin and The Ray recently mapped available ROW at interstate exits and found that installing solar panels at these exits could generate up to 36TWh of clean renewable energy each year, enough to charge 12 million passenger EVs annually.

Thus, the publicly-owned ROW along interstates and major highways present two opportunities that link the energy and transportation sectors: 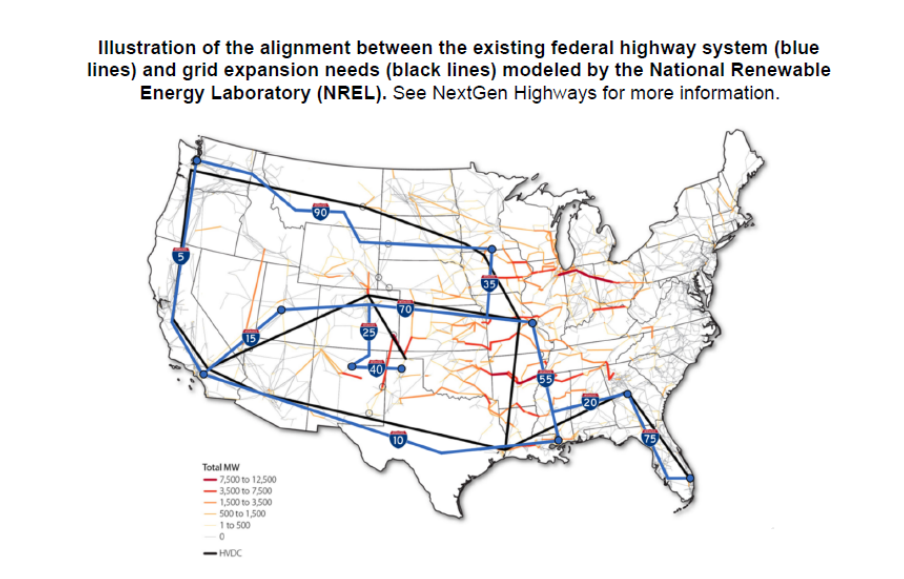 "NextGen Highways are highways where electric transmission lines and broadband/5G communications infrastructure are strategically colocated along the highway right-of-way. Colocating this infrastructure is essential to fully and efficiently facilitate the electric sector’s transition to renewable energy and the transportation sector’s transition to zero-emission vehicles.” — Next Generation Highways:  Co-Locating the Transport of Vehicles, Energy, and Information

“A national HVDC grid would create a coast-to-coast market for our nation’s abundant renewable resources, much as the original interstate system did for physical goods in the 1950s. It would supply our cities with renewable energy through a system that naturally connects them. It would support electrification of our transportation system. And the deployment of HVDC grid in the ROW could provide yet another revenue-generating opportunity for State DOTs who negotiate a land fee or pursue other arrangements, like a resource share.” — Transportation + Energy:  Smart Powered Highways

“Interstate highway land is an under-leveraged asset. We believe the ROW can be put to greater use and holds the key to modernizing our energy grid, accelerating renewable energy generation and transportation electrification. Not only can we generate clean energy for clean vehicles using transportation infrastructure that we already own, but State DOTs all over the country have the opportunity to tap into new funding sources through land fees, resource share agreements, and other business models that the federal government endorses.” -- Harriet Anderson Langford, The Ray

“NextGen Highways would be the largest infrastructure project in 50 years and represent an investment in America’s continued prosperity and global leadership.” — Morgan Putnam, NGI Consulting

“Breakthrough innovation is often unlocked by the creation of a common platform. The integrated energy and transportation system described in this research would not only accelerate the transition to clean energy and electric transportation, it would also enable a host of innovation opportunities. From the EV owner selling their battery capacity to the grid, to the large-scale energy investor, to developments in DC power conversion, to the entrepreneur providing services alongside new “electric forecourts.” — Andy Milton, Innovia Technology

The Ray is a proving ground for the evolving ideas and technologies that will transform the transportation infrastructure of the future, beginning with the corridor of road that is named in memory of Ray C. Anderson (1934-2011), a Georgia native who became a captain of industry and was recognized as a leader in green business when he challenged his company, Atlanta-based Interface, Inc., to reimagine the enterprise as a sustainable company—one that would pursue zero environmental footprint. Chaired by Ray’s daughter Harriet Langford, The Ray is an epiphany of the Ray C. Anderson Foundation. Learn more at www.TheRay.org.

Innovia Technology is a global innovation consultancy specializing in the front end of innovation, working with the best companies in the world to create opportunities for growth. We combine creativity with structure, drawing on a wide range of capabilities from science and engineering, to psychology and design. Our solutions work well and drive growth: they are emotionally compelling and commercially effective. We’re agile and responsive, delivering just what you need to make it happen.

Morgan Putnam, Ph.D., founded NGI Consulting in 2019 to help cities, corporations, and states envision a path towards next-generation infrastructure. NGI Consulting is particularly focused on the grid integration challenges that transportation electrification will face. Challenges that are highly similar to those experienced by the solar industry over the last six years: asset interconnection; distribution planning; and the availability of a strong transmission grid.