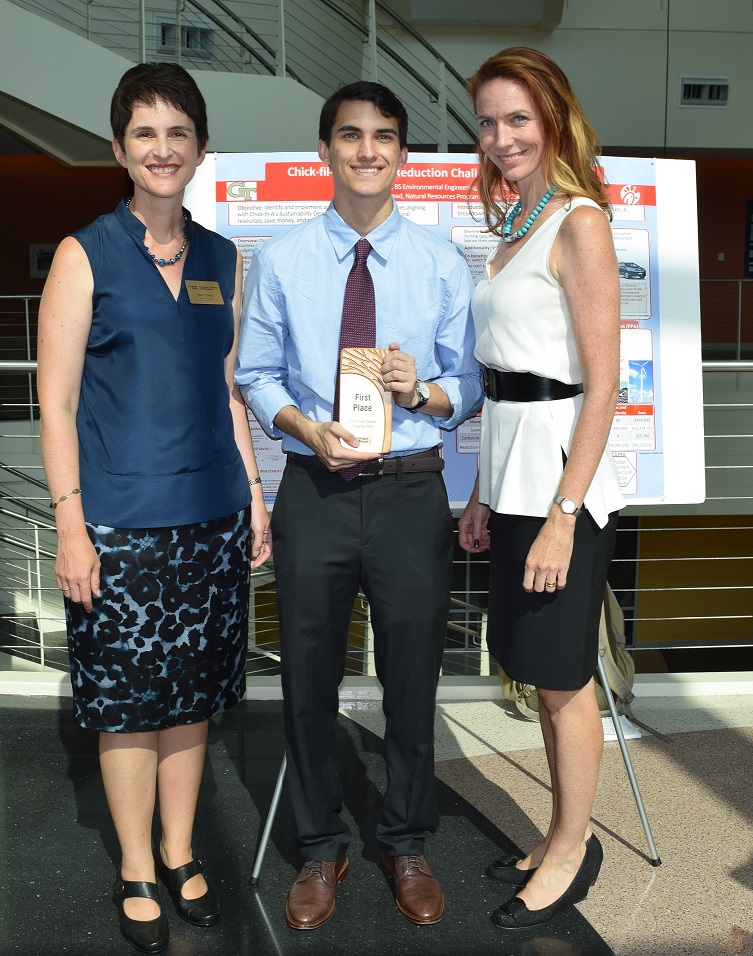 A Georgia Tech undergraduate student teamed up with Chick-Fil-A staff over the summer to reduce millions of pounds of heat-trapping greenhouse gases while delivering significant cost savings. Casey Erb, a third  year environmental engineering student, worked on a diverse set of carbon-saving projects, ranging from LED lightbulb retrofits in Chick-Fil-A parking lots to changes to the company’s car rental program. Directed by Prof. Kim Cobb (Earth & Atmospheric Sciences and director of the Global Change Program) and Prof. Beril Toktay (Scheller College of Business and faculty director of the Ray C. Anderson Center for Sustainable Business), the annual Carbon Reduction Challenge attracts interns and co-op students from across campus to participate in the 3-month-long competition, as they work to identify win-win strategies for carbon reduction within their host organization. This year’s cohort included 23 students from Georgia Tech, Kennesaw State University, and Emory University who worked on projects with more than eight organizations, including Fortune 500 companies, an elementary school, as well as the students’ own campuses.

At the final poster expo on August 14, 2018, seven student teams presented their final results to the public, and their overall achievements and performance were judged by a panel of Georgia Tech experts. Dr. Andrea Pinabell, the Director of Southface, an Atlanta-based energy and sustainability NGO, delivered remarks highlighting the key role for strong partnerships across Atlanta to accelerate the city’s shift towards a sustainable future. Aside from the winning Chick-Fil-A entry, Anna Benkeser (International Affairs and Modern Languages, ’18) won second prize with a proposal to convert a portion of the Georgia Tech shuttle fleet from diesel to electric, with a reduction in long-term fleet operational and maintenance costs. Leyla Battista (currently a Master’s student at Emory University) won third prize with a project focused on pairing cost-saving carbon reduction strategies with STEM curriculum development for Sope Creek Elementary School in Marietta, GA. Other finalist teams presented projects from Delta Airlines, Ethicon, Emory University, and Brown Bag Marketing.
By summer’s end, the students’ Carbon Reduction Challenge projects had already resulted in over two million pounds of avoided CO2 emissions, and were projected to deliver hundreds of thousands of dollars in avoided energy costs to their partnering organizations. If some of the students’ well-researched, and more ambitious plans are carried to full implementation, hundreds of millions of pounds of CO2 will never be emitted – the equivalent of taking over 8,000 cars off the road for an entire year. The Challenge delivers clear benefits to participating students as well, in terms of project management in real-world work environments, while helping them to see how they can be sustainability champions no matter what job title they eventually hold.
The Challenge is funded by the Ray C. Anderson Foundation’s NextGen Committee, the Scheller College Dean’s Innovation Fund, and the Sheth Family Foundation, and is an affiliated project of the Georgia Tech’s Global Change Program and the Office of Serve-Learn-Sustain. For more information please visit http://carbonreduction.gatech.edu.
Share