On July 28th, friends and associates of Ray C. Anderson gathered on what would have been his 80th birthday to dedicate the naming of a 16-mile stretch of Interstate 85 in West Georgia in Ray’s honor.  A West Point, GA native and graduate of Georgia Tech, Ray founded Troup County–based Interface, Inc., the world’s largest carpet tile manufacturer, and led his company to become a highly lauded and emulated model of sustainable industry. 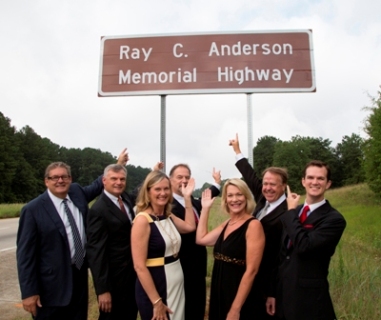 Beyond recognizing this visionary son of Troup County, The Ray C. Anderson Foundation announced the launch of a study to explore the possibility of establishing the newly named highway as the world’s first restorative transportation corridor.

Its long-term goal:  to demonstrate and display cutting-edge technologies and to foster innovative and sustainable practices in highway design, stewardship and management that change the way we think about highways.

How did a seed of an idea inspire something bigger and better than anyone could imagine?

It all started with an idea from two Interface associates who wanted to honor the man who did so much for his Interface employees and for their community.

What if. . .the highway could speak and tell Ray’s story, his vision; what would it look like?

And so the idea grew. Naming the highway was not enough. With a will, determination and perseverance that friends of Ray C. Anderson would have recognized, the family of the sustainability icon took this kernel of an idea and turned it into a goal that speaks to a bigger purpose: to make a 16-mile stretch of interstate in West Georgia into the most restorative highway in the U.S. Daunting? Yes, but nothing less than Ray Anderson would approve!

And the what if’s continue. Harriet Langford, Ray’s daughter and trustee of the Ray C. Anderson Foundation, said, “The more we talked with people – from the city, the county, the state, the Department of Transportation – the more we realized how exciting are the possibilities in front of us! It’s something that hasn’t been done! What if this highway project becomes a ripple, an example for what could be done?” 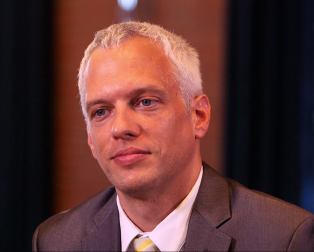 It’s one thing to dream big. It’s another to make it a reality. Realizing this major challenge, the Foundation, partnering with Interface, called on the Georgia Conservancy and Georgia Tech to undertake a feasibility study. The study is a first step that will help the Foundation and other stakeholders find out what are the opportunities for change.

How does one rethink a highway? How does one take a boring, unappreciated expressway and transform it into something better? 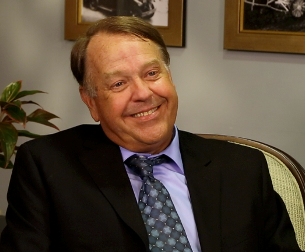 LaGrange businessman Phil Langford believes the Ray C. Anderson Highway Project will show how we can combine man-made assets and God's assets to make our planet a better place for his grandbabies.

“We don’t know yet what will come, but the project offers an opportunity for everybody to be involved . . .everyone up and down this corridor,” contemplated Mary Anne Lanier, Ray’s daughter and Foundation trustee. “What if the Ray C. Anderson Highway becomes “that place” to test the most modern technologies, for people to come and see what it is we’re doing, and to bring economic benefit to the community where Ray Anderson began his business life?”

“This partnership between the Anderson Foundation, Interface, Georgia Tech and the Georgia Conservancy is just the beginning,” mused Professor Richard Dagenhart, who will lead the project research at the International Urban Design Studio in the Georgia Tech College of Architecture. “First we envision what is possible, then we create visions for the future.”“This project is Ray Anderson to the core,” stated Allie Kelly, co-project leader from the Georgia Conservancy. “It’s a pioneer idea and in every way validates Ray Anderson’s spirit and priorities: his legacy of stewarding natural resources of the planet for future generations and feeding innovators’ hearts and souls."

What if. . . the highway energizes, and inspires, sustainability in action?

In looking to the future of the project and his city, LaGrange Mayor Jim Thornton sees the Foundation’s highway project as an exciting opportunity for LaGrange and all of Troup County. “I think it will be a catalyst for our community to embrace sustainability and environmental stewardship; to take Ray Anderson’s initiatives and legacy and look for ways our community can put his visionary leadership into local action.”

John Wells, President and CEO of Interface Americas and Advisory Board member of the Foundation adds, “I think the impact on LaGrange will be huge. The project will give an amazing amount of exposure to the community just by people driving by. LaGrange will stand out as a center of innovation.” In fact, over 10 million people will pass by this corridor each year. What’s more, the highway, as a next door neighbor so to speak, will give Interface a tremendous opportunity to “tell our story to customers with great pride as we enter the Green 16. If we can achieve restorative goals and demonstrate those goals, we will be following Ray’s principles and building on his legacy.”

As long-time associates who traveled the Interface sustainability journey with Ray Anderson, Wendell Hadden and Amy Lukken came up with the original idea to name a highway for Ray. In thinking about what this idea will mean to the people of Interface, Amy states, “Interface associates are going to be behind this in a big way. It’s an exciting opportunity for everyone to get engaged in a very meaningful, ongoing legacy for a man we all love. To us, ‘Ray’s highway’ is ‘our highway.’”

Wendell remembers how much the Sunday school hymn “Brighten the Corner Where You Are” meant to Ray. Wendell points out, “For all of our LaGrange and West Point associates, this highway project is that corner; this is our corner!”

What if. . .this project awakens new ideas and technologies that we can’t even imagine?

Will this project become a magnet for the technologies and innovations that Ray’s family and so many more envision? Will Ray’s highway provide a model to educate and inspire communities around the world to reimagine their own transportation corridors? By doing well in West Georgia, can we demonstrate good stewardship of our planet for Tomorrow’s Child? 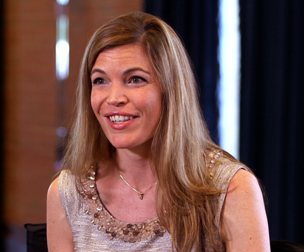 Allie Kelly, co-project leader from the Georgia Conservancy, foresees the highway project as a model with game-changing potential.