US businesses have the lowest trust scores of all OECD countries being tracked, other than those headquartered in Mexico.

Consumer distrust is at the core of the explosion of certifications John has creatively described in his last several posts, whether for avocados, buildings or more recently companies.  As consumers, we increasingly distrust businesses to do what’s right.
We “know” (actually a strong belief reinforced by thousands of negative news stories and personal experiences of companies letting us down) that doing the right thing is costly and takes more effort.  We “know” that, given the chance, businesses will cheat, whether it’s about how they treat their workers or what they do to the environment, especially if they can keep it a secret.  Capitalism is great, but someone needs to be looking over its shoulder every minute. Right?
This perception is growing.  Edelman is a huge PR firm that does a lot of outstanding research on consumer trust in institutions including business, government, NGOs and the media.  In its 2018 Trust Barometer report, trust in all institutions has taken a huge hit in the US.  Of course, media is reeling under an all out assault especially around “Fake News,” but of businesses from around the world, those headquartered in the US saw the biggest drop (-5%) in trust in just the last year.  US businesses have the lowest trust scores of all OECD countries being tracked, other than those headquartered in Mexico. As a US businessman of 35 years, this is revolting. (BTW - Canadian business has the highest levels of trust of all countries tracked.)
As consumers, we “know” that the incentive of business to make a profit is not aligned with ours, so we rely on trusted experts and third party audits and certifications to raise our confidence that they will do what they say.  On the other hand, it has been said that capitalism might be the greatest invention of humanity at allocating resources, catalyzing innovation and raising the material standard of living of billions of people.  Yet, it is under pressure from almost all of its stakeholders.
But, what if that wasn’t the case?  What if there was a better way to make a bigger and more legitimate buck?  Legitimate in that it did not steal value from others for itself, that the incentives of all stakeholders were aligned, that its excellence in fulfilling its purpose resulted in growing sales and profits.  Hmm… that sounds like something I’ve heard from a southern, visionary carpet guy.   Anyone know his name?
Indeed, capitalism is evolving right before our eyes.  Ray C. Anderson was a pioneer in this “around the bend” vision of capitalism, but new approaches are appearing and adapting under a range of names: “Connected” (Neville Isdell), “Creative” (Bill Gates), “Inclusive” (E.L. Rothschild) and now “Conscious Capitalism.”
Revolving around the book of that name authored by Whole Foods’ John Mackey and Babson College professor, Raj Sisodia, Conscious Capitalism (CC), is gaining the most momentum.  It is a growing network of 28 chapters in the US and in 13 other countries with the purpose of “Elevating humanity through business.”
Tonight, we are celebrating the first anniversary of our Atlanta chapter.  It's the most energized, diverse, and talented business network I’ve experienced since the early days of US Green Building Council local chapters.
The financial and organizational research that lead to CC uncovered that companies with a purpose beyond profit, a strong stakeholder orientation, conscious leadership and a proactively engaged culture can significantly outperform traditional short-term oriented companies in financial results.  These “Firms of Endearment” companies’ stock returns outperformed the S&P500 by 14 times  (seriously, 14X not 14%) from 1998-2013.  It’s a better way to make a bigger buck! 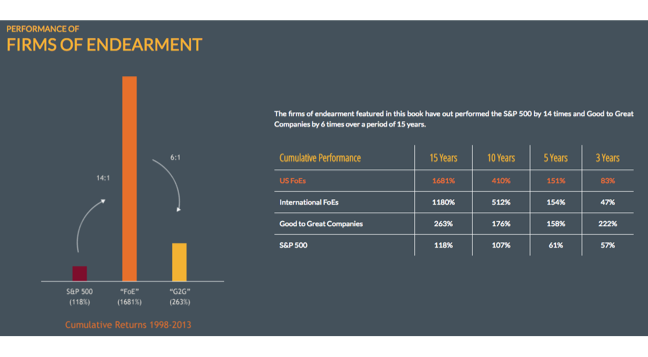 As an example, one of the most aggressive big company CEOs supporting this general evolution of more sustainable, conscious capitalism is Paul Polman of Unilever.  This past May, Paul announced that in 2017 their “Sustainable Living Plan” brands grew 46% faster than the rest of the business and represented 70% of the company’s total growth.  Like Ray, Paul was an early innovator, believing strongly in this vision so much so that Unilever has been leading the transformation of the palm oil industry that John wrote about in an earlier post. They are now demonstrating the benefits.
To keep their jobs, CEOs have to deliver growth and profits, but corporate and social incentives start aligning when more profits come from better products. Slowly but surely, more business people and companies are getting the message that Conscious Capitalism can be more profitable.  Even parts of Wall Street are beginning to see that good environmental, social and governance performance helps assure long-term profitability.  (More on Wall Street next week.)
Are we there yet?  Not even close, but new and economically successful models are emerging to light the way.
About Jim Hartzfeld:
Leveraging his 18+ years blazing new trails to sustainability with Ray Anderson and Interface, Jim is helping organizations build on their efforts in environmental sustainability to leverage human and green technologies to accelerate progress on business and societal goals.
Today, Jim consults independently with large and small businesses and advises organizations such as the United Nations Global Compact and the Corporate EcoForum. He has recently helped found Conscious Capitalism of Atlanta.
Contact Jim Hartzfeld:  jhartzfeld@hartzfeldadvisors.com
Share