This guest blog is from Will Courrèges-Clercq, who is studying Business Adminstration at the Scheller College of Business. Will has taken classes from the sustainability curriculum at the Ray C. Anderson Center for Sustainability, and he and his teammates recently won the Georgia Tech Carbon Reduction Challenge.

"I'm wrapping up the business mini-series with a guest blog, written by Georgia Tech student Will Courreges-Clercq. Will is a leader-in-the-making, someone with a sharp mind and a passion for our planet. He shares his experiences from the Carbon Reduction Challenge he participated in this past summer, which was funded by our Foundation's NextGen Committee. Enjoy, and thanks Will!" ---John A. Lanier

I first heard about sustainable business in Spring 2014 when I met Howard Connell, former Managing Director of the Ray C. Anderson Center for Sustainable Business, at a Dean’s Scholarship Event at the Scheller College of Business. His words of advice to me (loosely paraphrased) were that when it comes to corporate environmental sustainability, “It’s better to try to change one percent of Walmart than it is to open up one hundred Ben and Jerry’s.” What he meant is that since large corporations have such a huge general impact, affecting even a small portion of such a corporation makes a significant difference—more than would be possible by creating or expanding a smaller company such as Ben and Jerry’s, albeit legendary for its social responsibility and progressive ideas.

Throughout my sustainability journey at Georgia Tech, which has included taking the sustainable systems and communities course and the sustainable consulting practicum, and starting Georgia Tech Solar Home (Solar Decathlon), I have found Professor Connell’s advice to be valid. Most recently, I participated in the Summer 2017 Co-op and Internship Carbon Reduction Challenge and have once again found his advice to be valid.

For the Challenge, I worked at SunTrust with five other interns (four industrial engineering students and one business student working in wholesale banking and enterprise information systems). Our goal was to complete a sustainability project in addition to our individual internship projects and duties. For the sustainability project, we were prompted to research, propose, and implement a plan that would reduce SunTrust’s carbon emissions.

Therefore, what does Connell’s advice have to do with the Challenge? Perhaps our team didn’t work with the C-Suite at Walmart, the Fortune 1 company. However, we did work at a Fortune 500 company and learned how big business changes equate to big impact. SunTrust Banks, Inc. is a top-ten U.S. consumer bank that operates in eleven states and provides financial services nationwide through its 25,000 teammates. In other words, SunTrust is a significant corporation.

Our sponsor at SunTrust presented our team with several interconnected projects, such as starting a “Walk-Bike-Train Challenge” campaign, increasing recycling, increasing the use of LED lighting, and reducing employee travel.

Initially, we thought, perhaps rather selfishly, “How do we win the Challenge (and make maximum impact)?” We considered how we could make a narrow but impactful and strategic project in the realm of travel reduction (i.e. try to change one percent of Walmart). In a brainstorming meeting, we asked the following questions: What happens if we reduce one to two percent of SunTrust’s domestic staff travel? What happens if we change SunTrust’s default rental car reservation option from intermediate to economy class? Is there such a thing as a more fuel-efficient airline, and if so, what happens if we move a small percentage of flights to a more fuel-efficient airline?

The above issues were our company’s metaphorical “ripe, low-hanging fruit” when it came to carbon emissions. We conducted research and confirmed that the proposals would have impact. We then worked to execute our project. Ultimately, by changing a small part of SunTrust, we could reduce 1.85 million pounds of CO2 and create $1.2 million in net savings. Our rental car modification (changing the default car class from intermediate to economy class) option was implemented day one, following a meeting with C-Suite executives. SunTrust acted on our air travel reduction recommendations earlier this month. 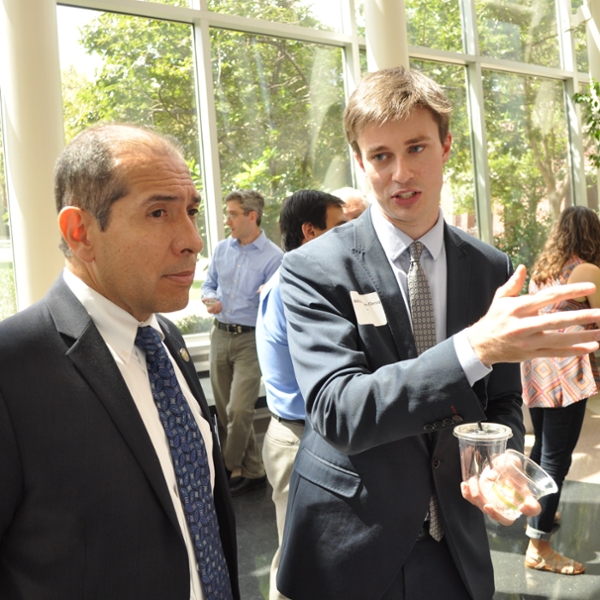 Will talking with Dr. Garcia, Director of Climate Policies and Renewables at the Atlanta Mayor's Office of Sustainability

Such rapid adoption and significant impact may seem difficult to believe. One may wonder if the CFO, CIO, and CHRO simply appreciated their summer interns’ efforts and didn’t want to hurt their feelings. Perhaps. However, I have a more believable, two-part theory to explain why our solutions were adopted (or will be soon).

First, our recommendations were palatable. We proposed to modify only a small percentage of employee travel (2%). We could achieve significant reduction in carbon emissions without upsetting SunTrust’s current travel system. In all of my professional experiences enabled by Georgia Tech, I have dealt either with implementing or improving a new system or with changing people’s mentalities, either directly or indirectly. People usually don’t want to uproot their current practices completely for reasons they may not understand or view as important.

Second, the solutions were easy to implement and understand, meaning that people could take ownership of the carbon reduction efforts. An employee might see the value in using a Skype video headset in order to reduce travel to one or two meetings per year. An employee traveling alone to a meeting might see how booking an economy class car can reduce impact on the environment and help the company’s bottom line as well. It’s not difficult to be part of solutions like these. I believe that effective corporate sustainability involves educating employees and giving them a sense of independence and ownership in being a part of the solution for reducing the company’s carbon footprint.

However, sustainability is viewed according to how you paint the picture. For SunTrust, we provided padding on top of their current sustainability platform that allows the company to compete better with peer institutions, be more operationally efficient, and increase their technological prowess. As a Floridian, if someone tells me, “Half of your state will be underwater in two hundred years (or whatever the estimation is),” I cannot even begin to visualize that possibility let alone comprehend it. We provided SunTrust with a concrete way to understand carbon savings from our project: It would equate to 500+ years of continuously watching the Ed Sheeran cameo on HBO’s Game of Thrones! That’s easier to relate to.

Sustainability is hard, no doubt about it. However, if we keep tackling those “What if we changed one percent?” questions, we can begin to make progress. As you consider how you will achieve your own sustainability goals, please enjoy a scoop of Ben & Jerry’s Cherry Garcia. Ice cream makes everything better.

The Challenge is funded by a grant from the Ray C. Anderson Foundation's NextGen Committee and the Scheller College Dean's Innovation Fund, and is an affiliated project of the Georgia Tech Center for Serve-Learn-Sustain.

Will Courrèges-Clercq is studying Business Adminstration at the Scheller College of Business.