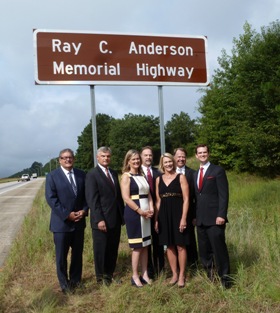 The State of Georgia is dedicating 16 miles of Interstate 85 in Troup County to the world-renowned pioneer in business sustainability, Ray C. Anderson, the late founder and chairman of Interface, Inc., whose flagship manufacturing operation is based at either end of the corridor, in West Point and LaGrange.The bill designates the stretch of Interstate 85 in Troup County from Exit 18 to Exit 2 as the Ray C. Anderson Memorial Highway. The legislation was sponsored by State Representative Randy Nix (R-LaGrange) and will be signed by Governor Nathan Deal on July 30.

“Ray Anderson was truly a visionary,” said Nix. “Not only did he revolutionize the carpet industry, but his commitment to manufacturing sustainability has proven that good environmental stewardship is good business.”Once convicting himself as a “plunderer of the earth,” Mr. Anderson was the founder of the largest global manufacturer of modular carpet who became a sought after speaker and the author of two books.“Ray never settled for status quo, and we don’t intend to either,” said Harriet Langford, foundation trustee and Ray Anderson’s daughter. “We have achieved the first step by getting the highway named for Ray, but we are partnering with Interface to go much further. We seek to make this section of I-85 a sustainable, restorative highway. Just as Interface is committed to Mission Zero®, the Foundation hopes this highway project will become a legacy project that fully realizes Ray’s vision.”  Mr. Anderson, a small-town Georgia boy from Troup County who played football on scholarship at Georgia Tech, began Interface in 1973.  In 1994, he inspired to challenge his publicly traded company to reimagine his petroleum-dependent manufacturing company based on sustainability principles. Before Mr. Anderson died in 2011, he created a foundation in his name dedicated to environmental sustainability and responsibility.“Mr. Anderson’s impact on industry continues,” said John Wells, president and CEO of Interface Americas and member of the Ray C. Anderson Foundation’s Advisory Board.“Ray’s legacy rests not only on the shoulders of the 3,500 people of Interface who are bringing sustainability to life every day in our factories and in their communities,” said Mr. Wells, “His far-reaching influence includes all of industry and the next generation of leaders, via his influence on higher education.”Since its public launch in 2012, the Ray C. Anderson Foundation has funded major research initiatives at Georgia Tech, Emory, Georgia State, and Clark Atlanta, all located in Atlanta. A dedication ceremony will be held July 28, 2014 in LaGrange.

About the Ray C. Anderson FoundationThe Ray C. Anderson Foundation is a 501(c)(3) not-for-profit organization that seeks to promote a sustainable society by supporting and funding educational and project-based initiatives that advance knowledge and innovation in sustainability.About InterfaceInterface, Inc.  (Nasdaq: TILE) is the world’s largest manufacturer of commercial carpet tile. For 41 years, the company has consistently led the industry through innovation, and now leads the industry in environmental sustainability. It is setting the pace for development of modular carpet using materials and processes that take less from the environment, and is well along the path to “Mission Zero®,” a 20-year-old company-wide promise to eliminate any negative impact it has on the environment by the year 2020.